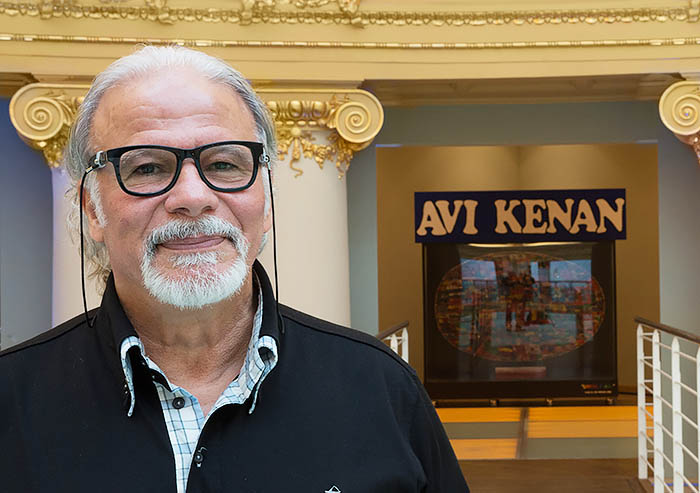 The art is the sculptor, or as Maurice Bardeche has put it especially for literature: ‘we cannot explain the piece if we do not present in the same time the man who wrote it’. The photographer Nat Finkelstein even said: ‘the biggest work of art of Andy Warhol was Andy Warhol himself’.Moreover, the Artist makes his own work, free and unlimited, or, saying it with the words of the English Grand-Master of modern sculpture, Henry Moore in 1983: ‘ a real artist is someone who has a vision on the reality he creates himself, the reality he invents’. No doubts, Avi Kenan, is in such an artist-inventor, a stormer on space, a visionair, an inspired and finding seeker.He was born on June 5th 1951 of Jewish Parents. During his youth, he stayed in Israel. At a very early stage, he felt his talent and creativity which he expressed in statues. Together with other young people he exhibited some of his works and the need to create became immense. During a couple of months, he received art education as the ‘Beth-Rothsild-Institute’ of Haifa, and at the same time he took classes at the Academy of Bat-yam. But his unborn individualism, his strong personality conflicted with the scholastic, artistic constraints and he rejected all influence by teachers or artistic dogma. He even avoided art galleries and did not read art magazines.

“Every human being, every living creature, every
inanimate object in this universe should be respected and treasured, not used as a target.

Between 1972 an 1976 his exhibitions were very successful in Haifa, Bat-yam and Tel Aviv. His irresistible urge for being unrestrained, his urge for artistic and human freedom forced him to come to Europe and settle there. He came to Belgium, which he considers to be the centre of Europe he exhibited his Art in different countries. Avi Kenan speaks of his work: ‘life is like a movie, which can be interrupted by the artist at any moment in order to absorb an image and recreate it. That in fact is the essence of my work. My work is part of my life, a part of reality, being sorrow and distress, happiness and joy.’ He expressed his work of life in a series of bronze statues, in which he puts his vital emotion and imagination. Even though they are extremely heavy, they evoke eternal movement, the flamboyant lightness of existence and the inner joy of life, as in his sculptures |Flying in the Wind – Horse Power| and |Ballerina|.

Sometimes his sculptures are heavily loaded with emotions, emphasizing pain of life complexity of existence. For example the unforgettable statue: |Christianity| of which the first exemplar is in possession of Pope John Paul II. Two stretched arms with grasping hands-begging for help – the head bowed, hidden under a veil, invisible but still present, two legs leaning and nailed; an unforgettable protest. Or with the words of the young Albrech Rodenbach: ‘Horribly beautiful’. |Christianity|, the doctrine and the love of a destroyed and tormented Lord, sometimes the artist becomes tranquil, contemplative and biblically-ascetic and mystic, as in this statue |Meditation| of which the first exemplar is in the possession of Prince Rainier of Monaco.Other examples are: ‘The Silence World’ and ‘Starvation’. Between joy and pain, between dancing movement and quiet meditative moment,between dream and lovers, the works of art of Avi Kenan hovers between two thematic poles, which also determine the live of the artist. His style is strictly personal authentic and recognizable, his statues arc drawn and modelled with extreme care; the splendid golden patina makes the bronze material an attractive and fascinating structure.

Quite rightly they name Avi Kenan the Salvador Dali of sculpture. Personally I think it is not so evident to isolate Kenan’s very individualistic work from the Jewish Cultural Identity. Some of his statues leave a hardly indefinable impression of sublime contemplation mystical movement pneumatic inspiration (wind), of challenge and struggle, even a clear symbolism, more over a strongly marked surrealism. All this proofs his spiritual perfection, his inner emotion and cultural identity. With his work Avi Kenan brings us closer to the image of beauty we figure ourselves of this world.

I am grateful for being endowed with the capability of expressing myself directly through my sculptures and of bringing enjoyment and hope to others. Honored to have success from the first day I arrived to Europe